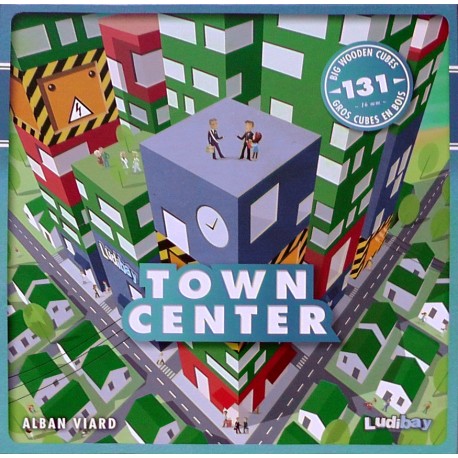 In Town Center, players build a city – in particular, the town center. They add cubes on their personal board and try to arrange them as best as possible in order to score the most victory points. Each cube represents a different type of module. Flats, shops, offices, generators, lifts, car parks, town hall can be built and stacked during the course of the game. Each module generates influence on adjacent land and on cubes directly below or above.

Each round, players will gain two cubes of different colors through a non-random mechanism, build them on their game board, then eventually stack them in order to make towers according to the building rules. If the players have done their job well, some modules will be able to evolve, becoming bigger in three dimensions. The last phase is an income phase in which players gain money from the shops and parking lots if they are supplied with electricity.

The bigger and higher your city is, the more victory points players will have at the end of the game, which lasts ten rounds – but do not forget to provide electricity to all your flats, shops, and lifts to make them more efficient.

Changes in the 4th edition:

See also Card City, Clinic and Small City, all part of the same game universe. All three games are stand alone games and can be played separately.