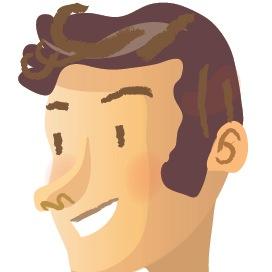 By day, Alban Viard is a mathematics teacher in France.

By night, while his students sweat in their homes, pondering his homework problems, he labors gleefully in his lair, designing new game mechanisms…

But inspiration does not respect time and space, so he always has a small notebook and pen handy: No idea escapes this wily trap!

He is also the father of 4 children who are his first playtesters, and his first prototype makers.

He likes complex games with only one task that is hard to master, and he can spend hours playing the same game. Naturally, he is fond of all creations by Splotter Spellen, makers of some of his very favorite games.

He got his start in game design by creating many Age of Steam expansions, because he also adores train games, and the abstract mechanism of connecting things in games gives him goosebumps of delight.