You still have 12 days to use your coupon CLINIC2020. This coupon will give you a discount of 10% and it can be used TWICE !! 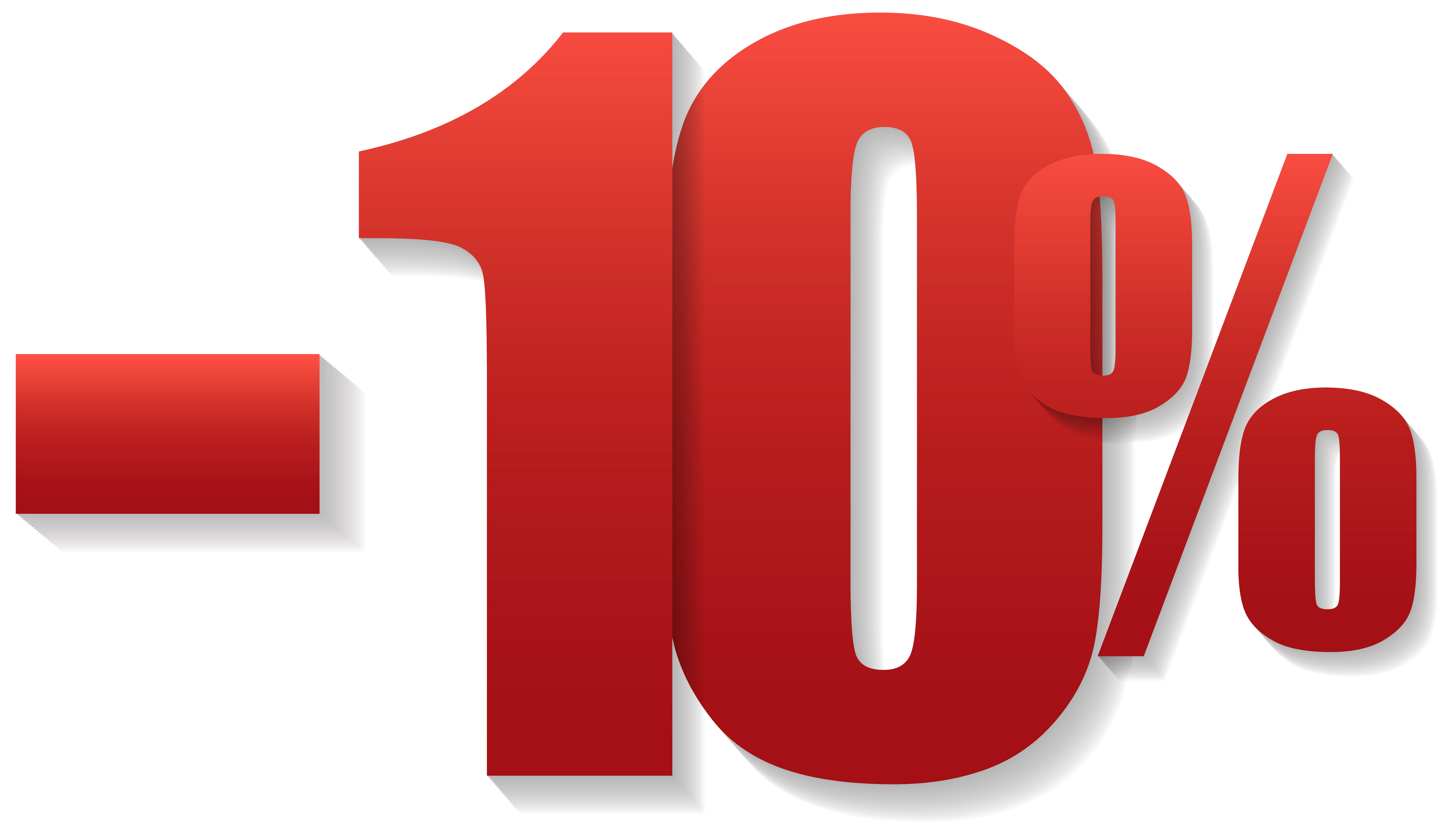 I will have new stuffs for the Non Essen fair: 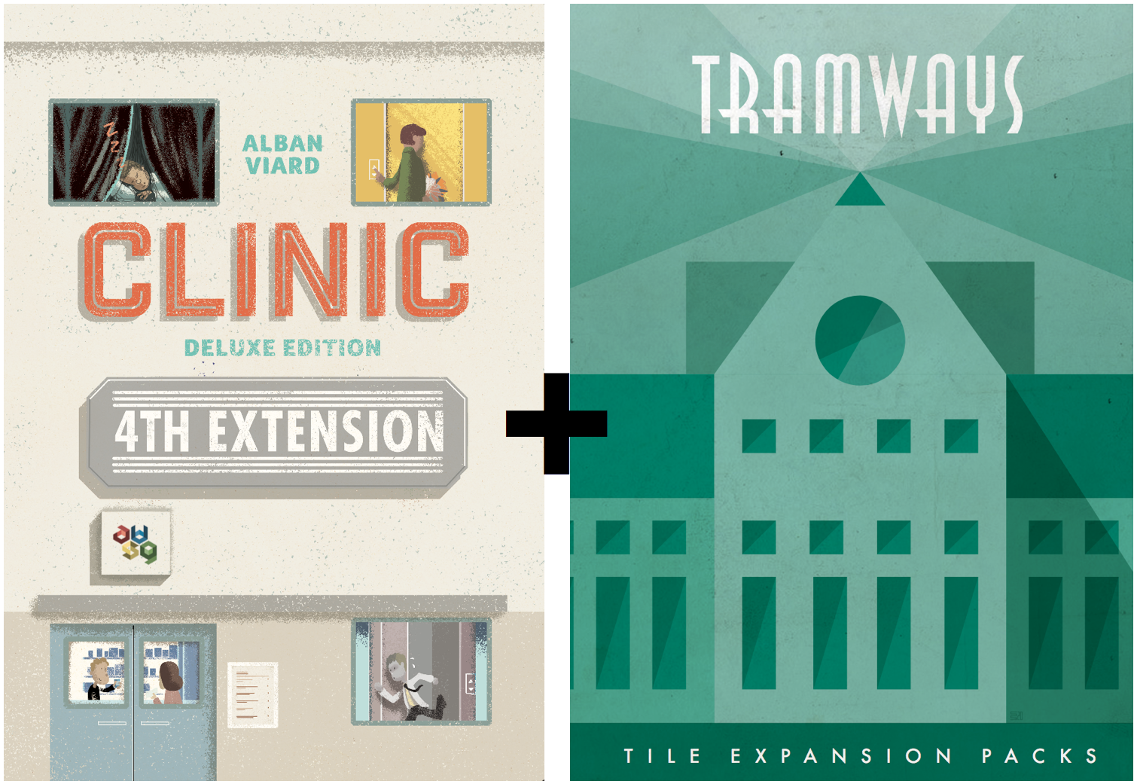 That's why I have decided to release the last Deluxe Extension in the series! 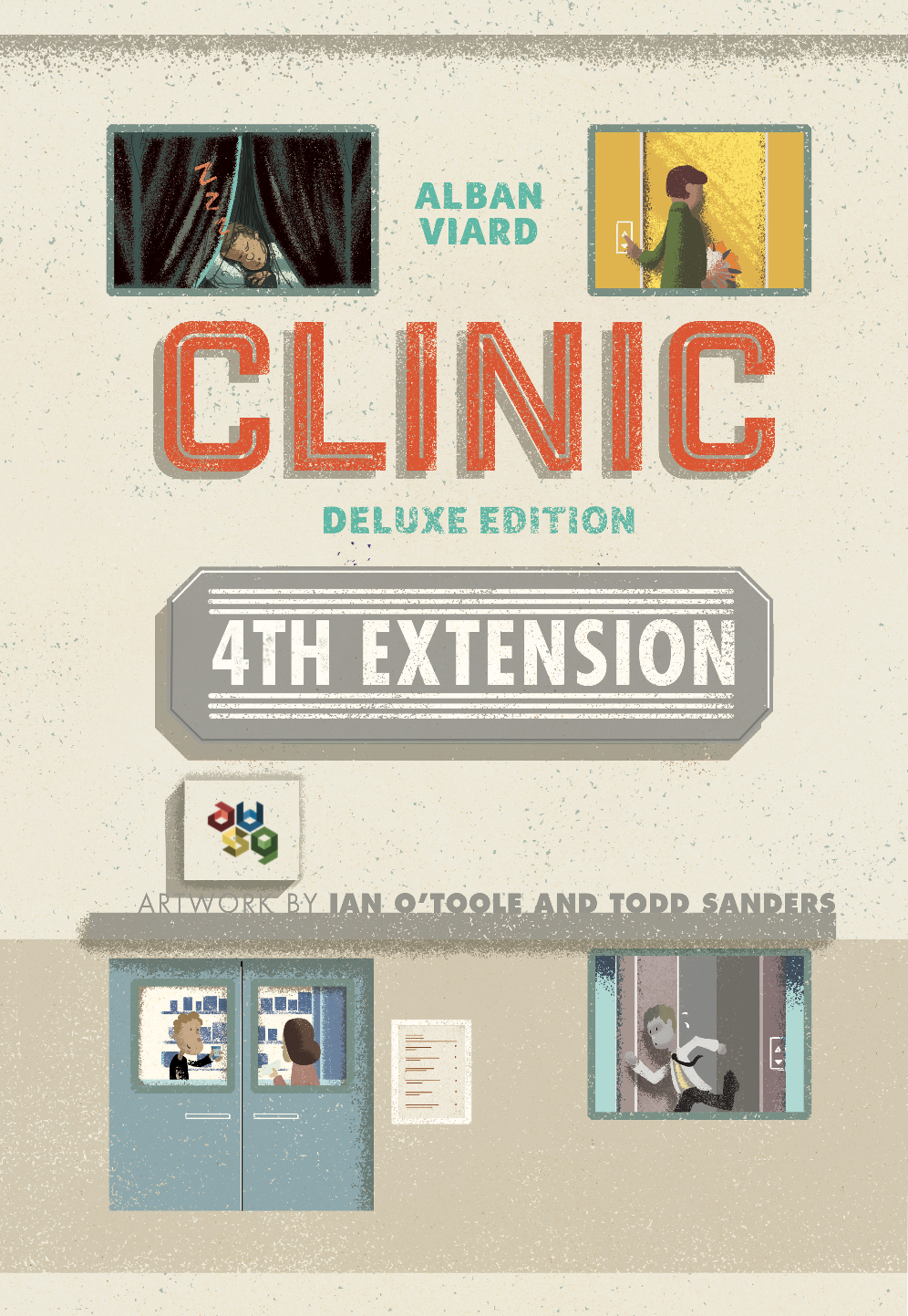 Tramways Tile Expansion Packs: I add a new expansion that will add more variety to the building of your city during the setting phase with this release of 46 New Tiles! I have added nice big Clinic Tile with special abilities... 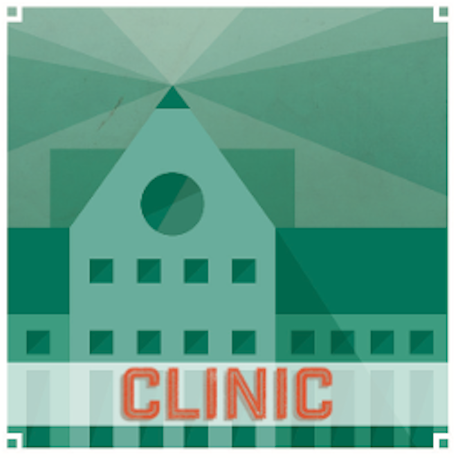 As you know, since the opening of the website, I have paid a particular attention to the shipping costs, and most, for not saying all items, have inexpensive shipping costs.

Since 2016, I have never increased any shipping fees. With the new Trump Administration policies and the Covid19 pandemic, my shipping fees have increased by 120% since 2016. I am now not able to maintain the 2016 shipping costs. I would like to apologize on this but I will increase few shipping costs to cover 50-80% of my real costs. Customers and fans won't be charged 100% of my real shipping costs because they are supporting my work when you are directly ordering the games and extension on my site. 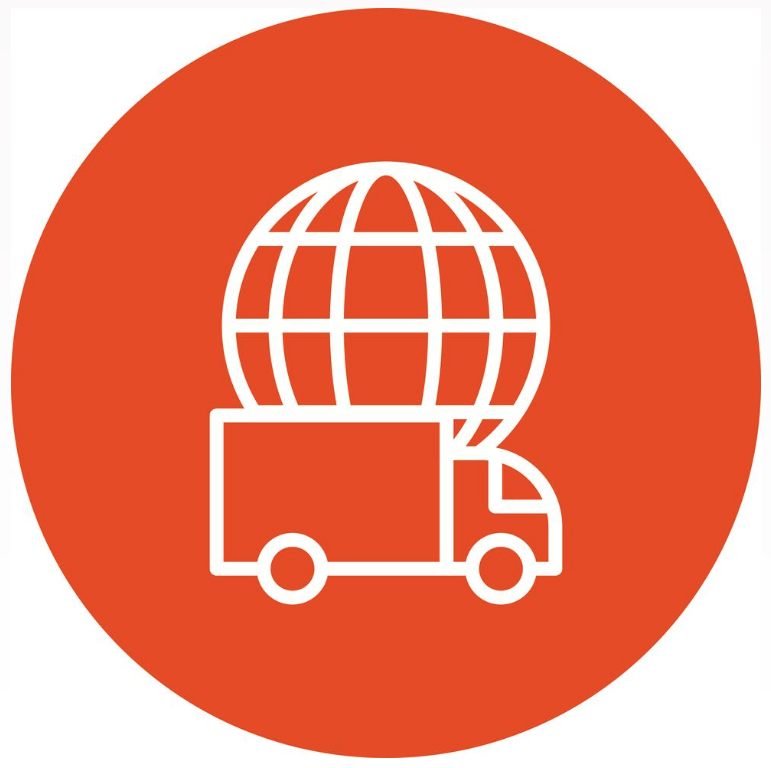 Hope you will understand that the pandemic has put everyone in a very bad position... Hope new year would be a better one for the shipping costs...

Few more news during the Summer and the pandemic:

- the shop is still open and you can freely order as there is no pandemic on the Earth. Some delays have been increased a lot, but all orders arrive if the shipping address is correct. The most difficult area to reach it South America now, but we cross the fingers and we really hope the situation will become smoother very very soon.

- we just get in our warehouse the Covid19 extension and we are now in the fulfillment phase. I have imported the excel files from most of the rewards of the KS campaign, but I will start with the Vaccins, the Pasteur and the Jonas levels. Some backers in Europe should also get their Hospital levels, but they will be very few and lucky. The time delivery is September for this campaign. I am adding a flyer with a 10% discount, so be careful when you open the cardboard envelope !!! 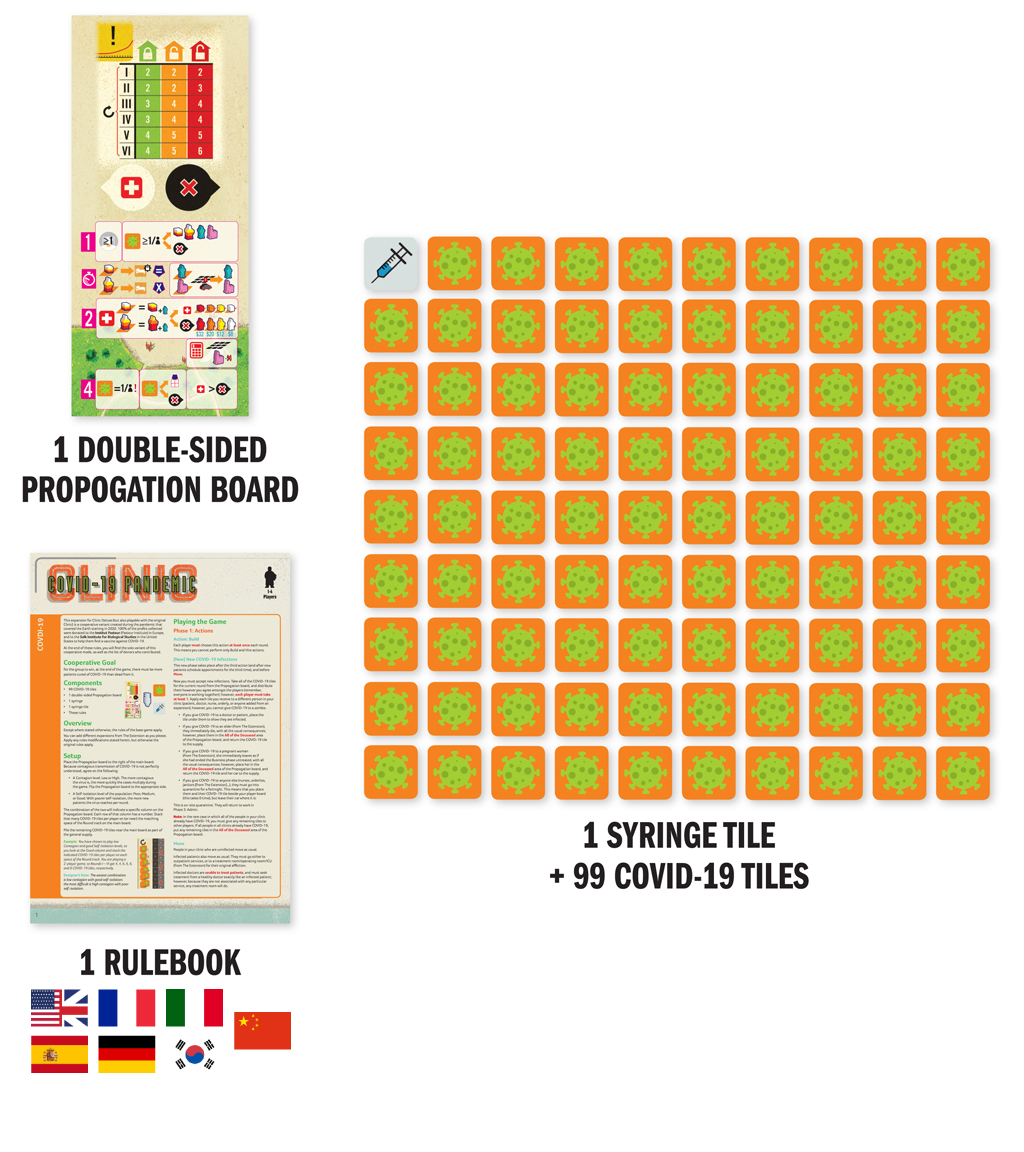 - we also get all stuffs for Pulp Detective 3, the player mats and the crazy Collector box that we have called slip cases. They all look good and perfect. We plan to start the shipping of these items Mid September, when you have finished the Covid19 extension fulfillment. 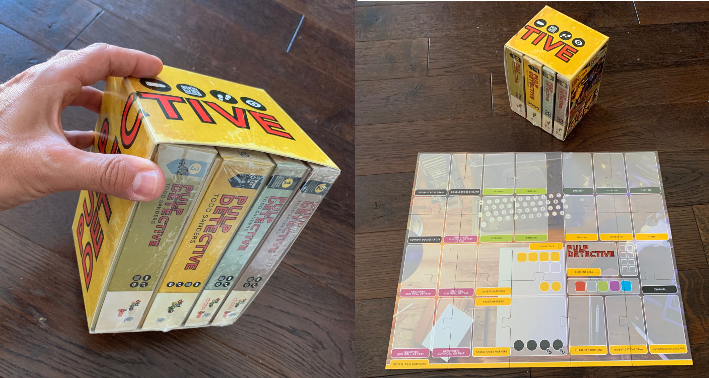 - About Pulp Invasion, our second game in the Pulps Series, all files have been sent to the manufacturer (64 files!), I would like to thank Todd Sanders who made a crazy job. He is very efficient and very flexible. I know him for 7 years now and I have never been disappointed by his job, always ready to help. He will run a great campaign to publish new books and I will share the link with you when it will be public very soon. 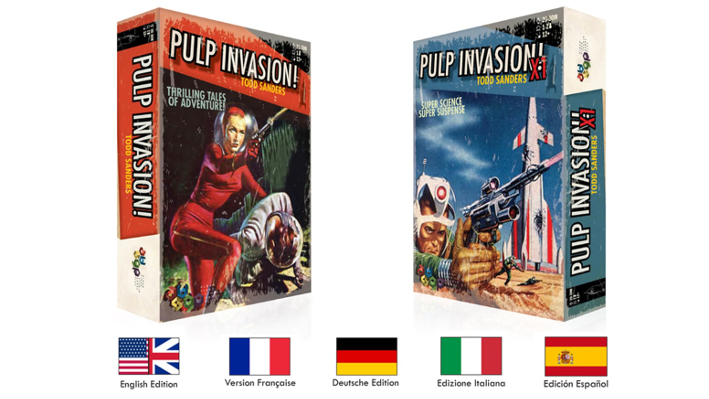 - We are thinking to release some stuffs for the Virtual Essen fair, more news when we know more. May be a Clinic Extension 4, that would be fun to do because we do not have any Clinic Extension 2 neither 3... 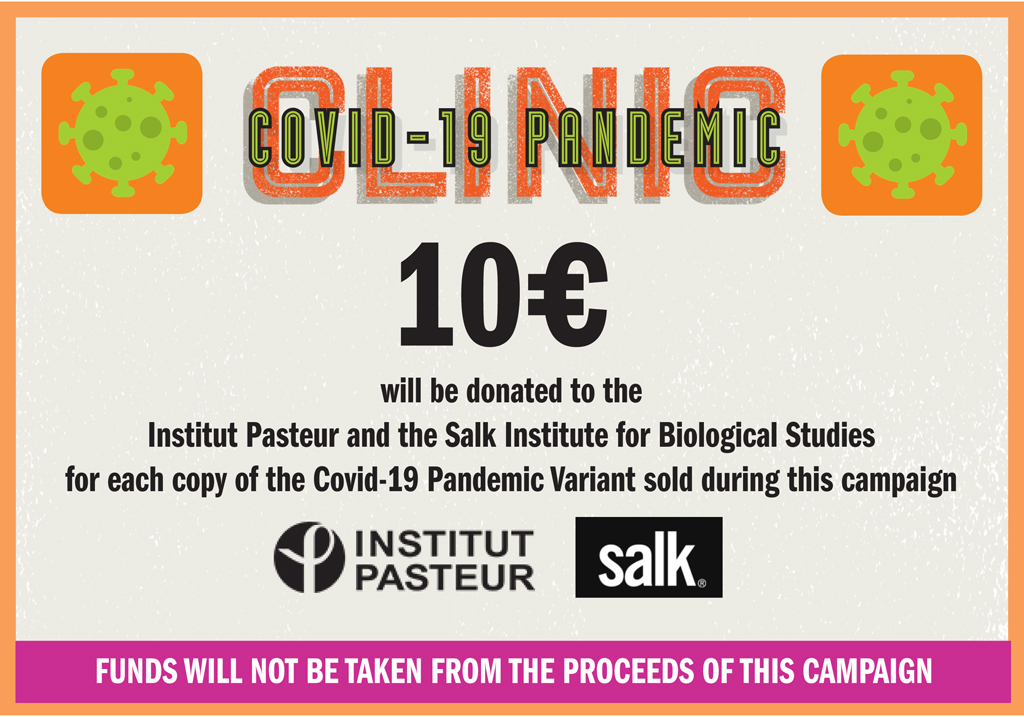 1) We are still working and shipping orders during the lockdown, I usually ship the orders on Friday

2) I will launch a charity campaign relating with Clinic Deluxe Edition, the CoViD_19 and a cooperative mode at the end of April, so stay tuned and click HERE if you want more informations.

I am very happy to announce the new Pulp Detective Expansion called Adventurers, Gadgets and Nemesis:

Here the last 2 new maps for Tramways the base game we are working on...

Tramways: Adelaide with special harbors connections and passengers flow from and to the downtown ... 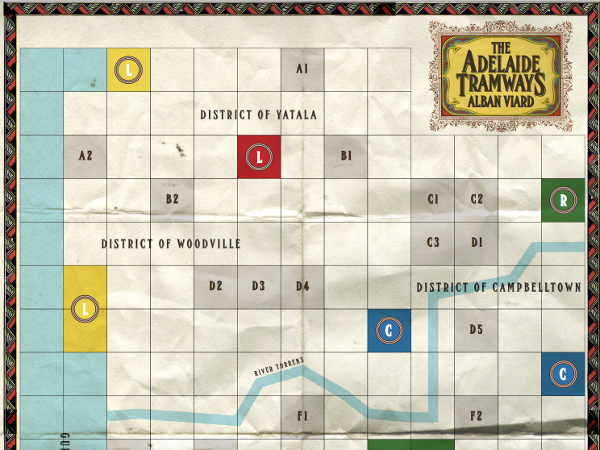 Tramways: Shanghai at the beginning of the XXth century, with bad actions that you would like to avoid... 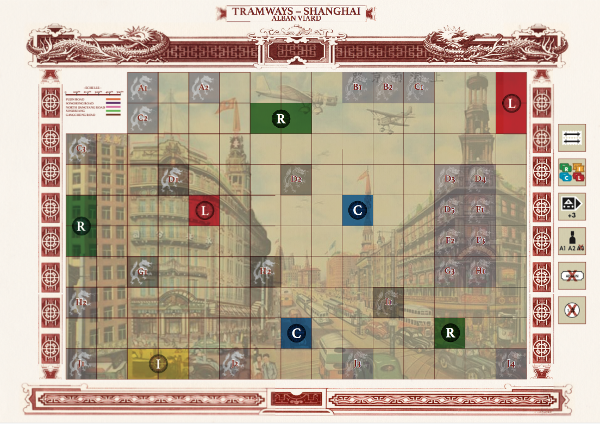 These 2 maps will be mounted on heavy cardboard like the Paris/New York map in 2017.

The campaign will be launched in February 2020 on Kickstarter!

Halloween and black orders! Happy to offer the shipping costs till November 5th 2019 with the coupon ESSEN19 (worldwide available, min 15€)! 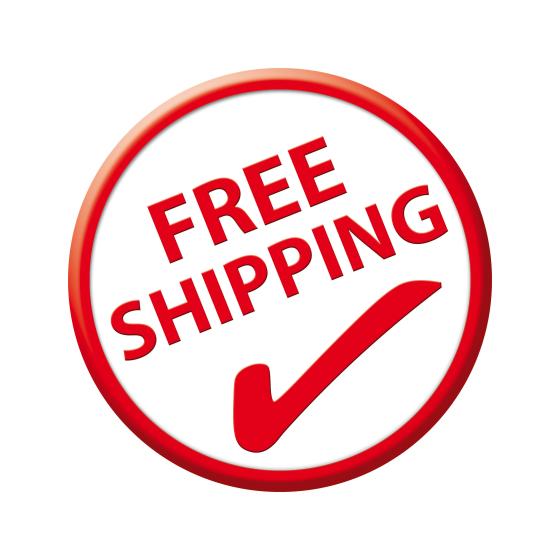 I am very proud to show you the box cover of CliniC Deluxe Edition: The Extension with Artwork by Ian O'Toole

It features ALL Expansions already released (>12 expansions) in 2014 and 2015 with new layouts, new graphics, new illustrations and new special twists 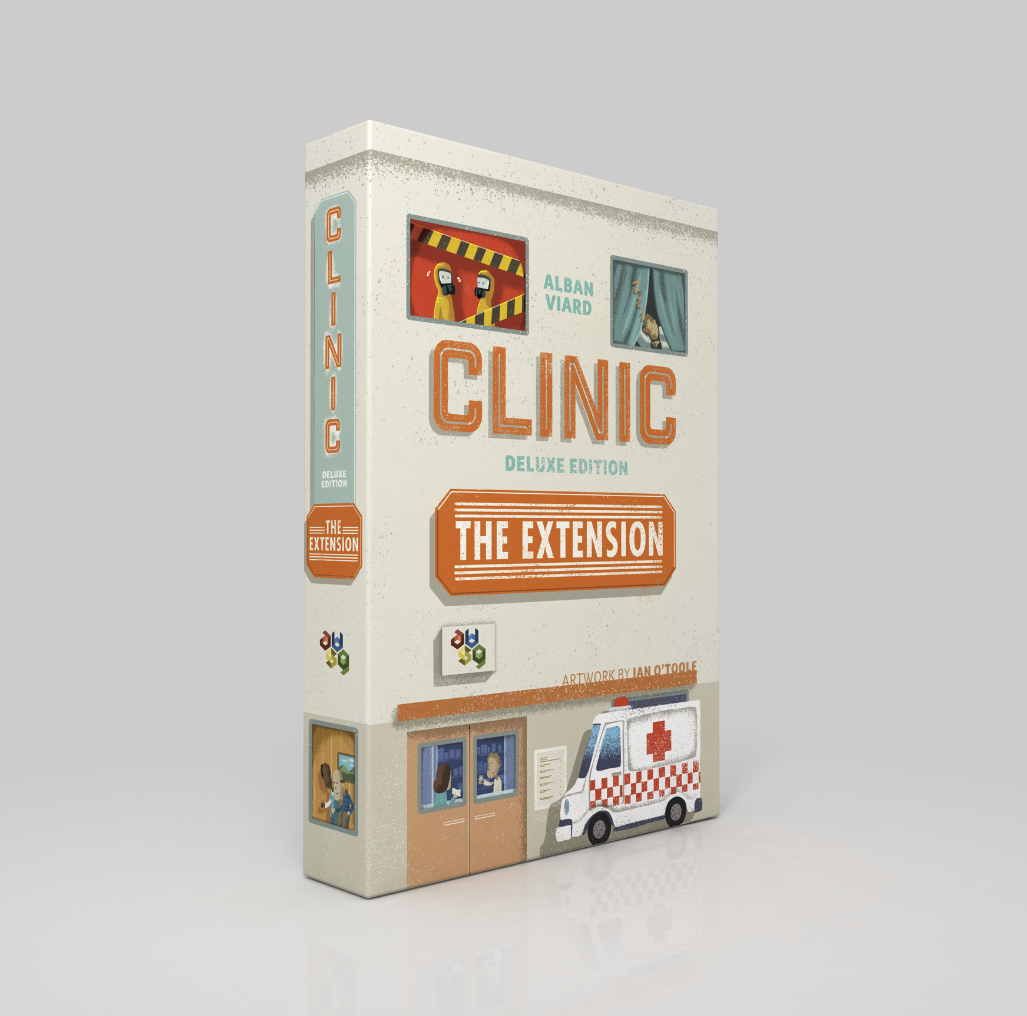 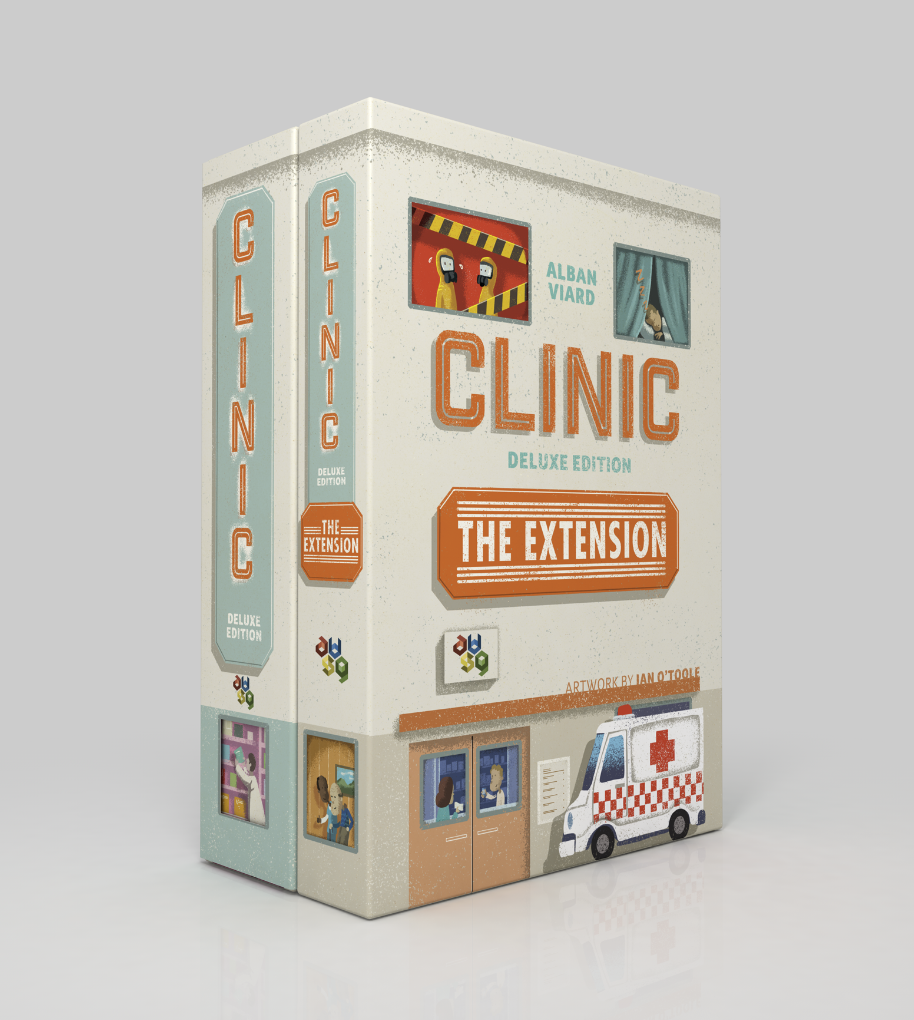 Kickstarter is scheduled May 7th 2019!

Ian O'Toole has sent us the box cover of the new Clinic: Deluxe Edition that will hit the Kickstarter tables May 7th 2019 ! 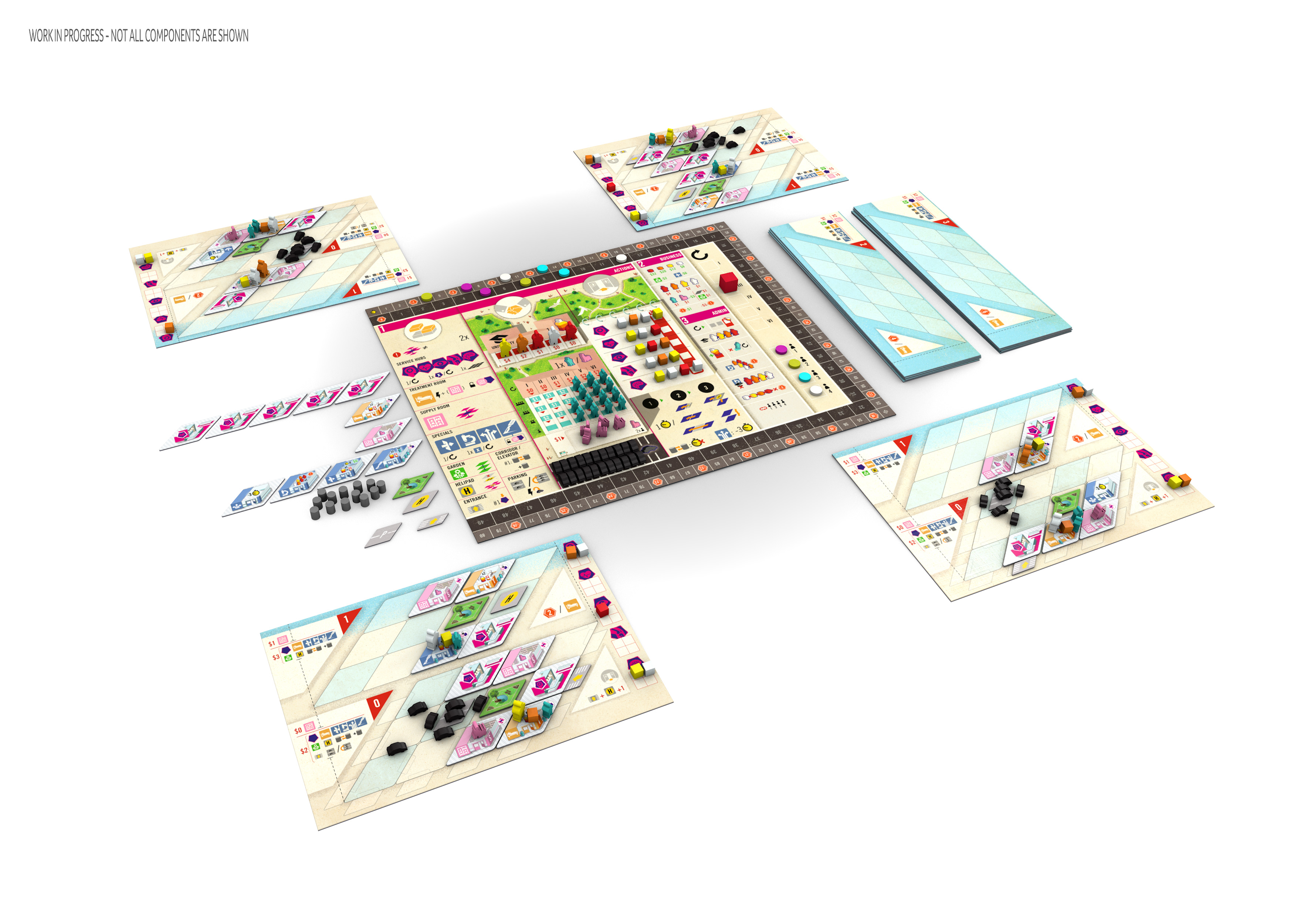 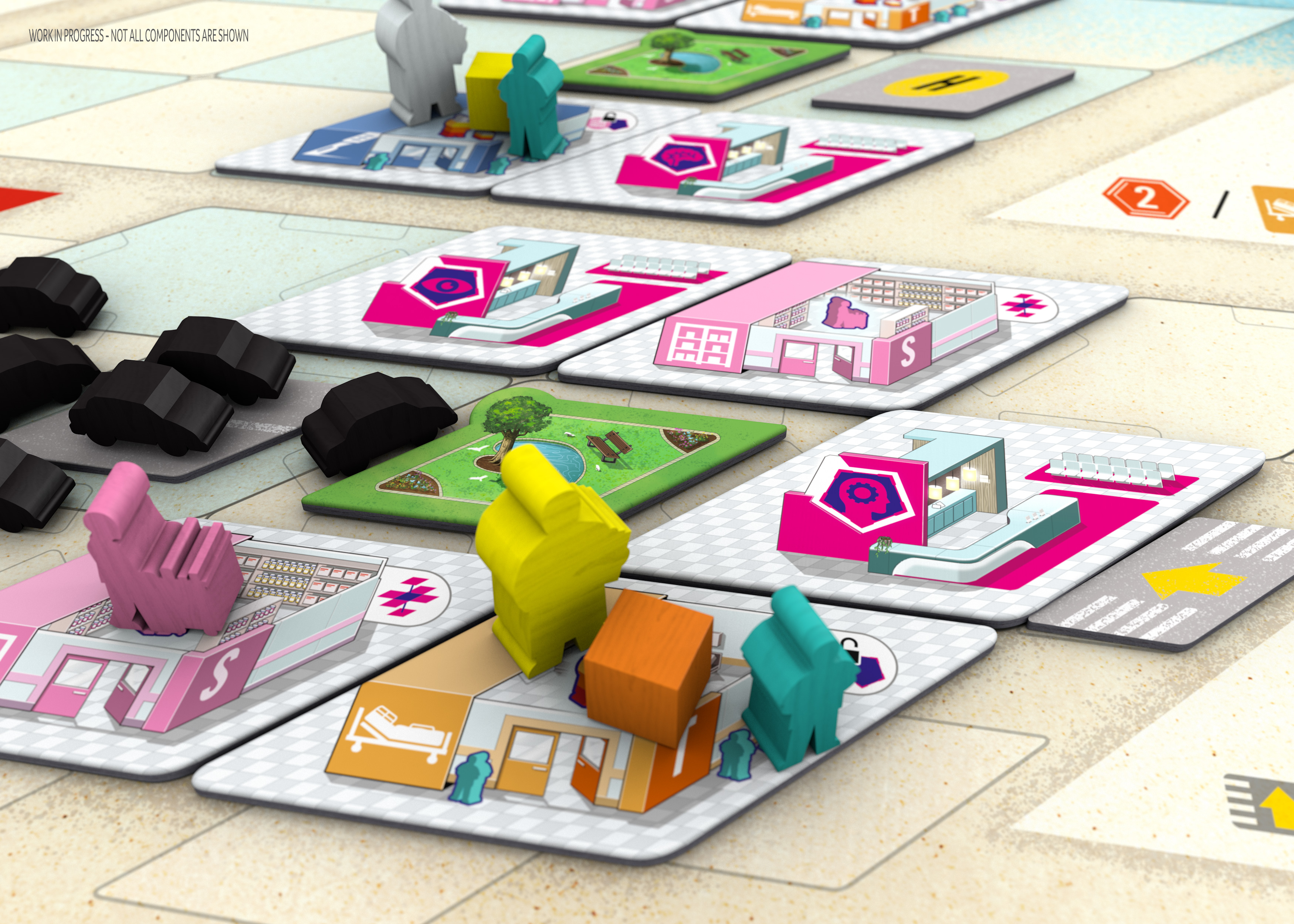 I am proud to announce the release on Kickstarter of the big expansion called Tramways: The Dystopian Expansions April 2nd 2019 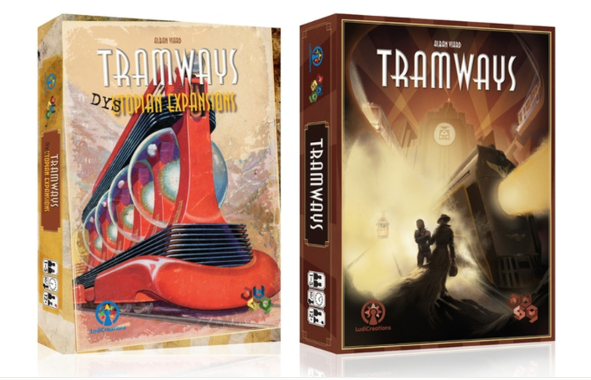 Sometimes News are very spaced out because I do not have anything interesting to tell you ...

Sometimes News are coming very quick after the last one (only 2 weeks)... I am happy to share with you the very very first illustrations and graphics for my next BIG board game CLINIC DELUXE. This game has been released in a cut and scissors version in 2014, but I have the opportunity to make something great now thanks to your incredible support. We have started the discussion with Ian O'Toole (VINHOS, LISBOA, AGE OF STEAM...) for 1 year and a half and this is how the illustrations would be 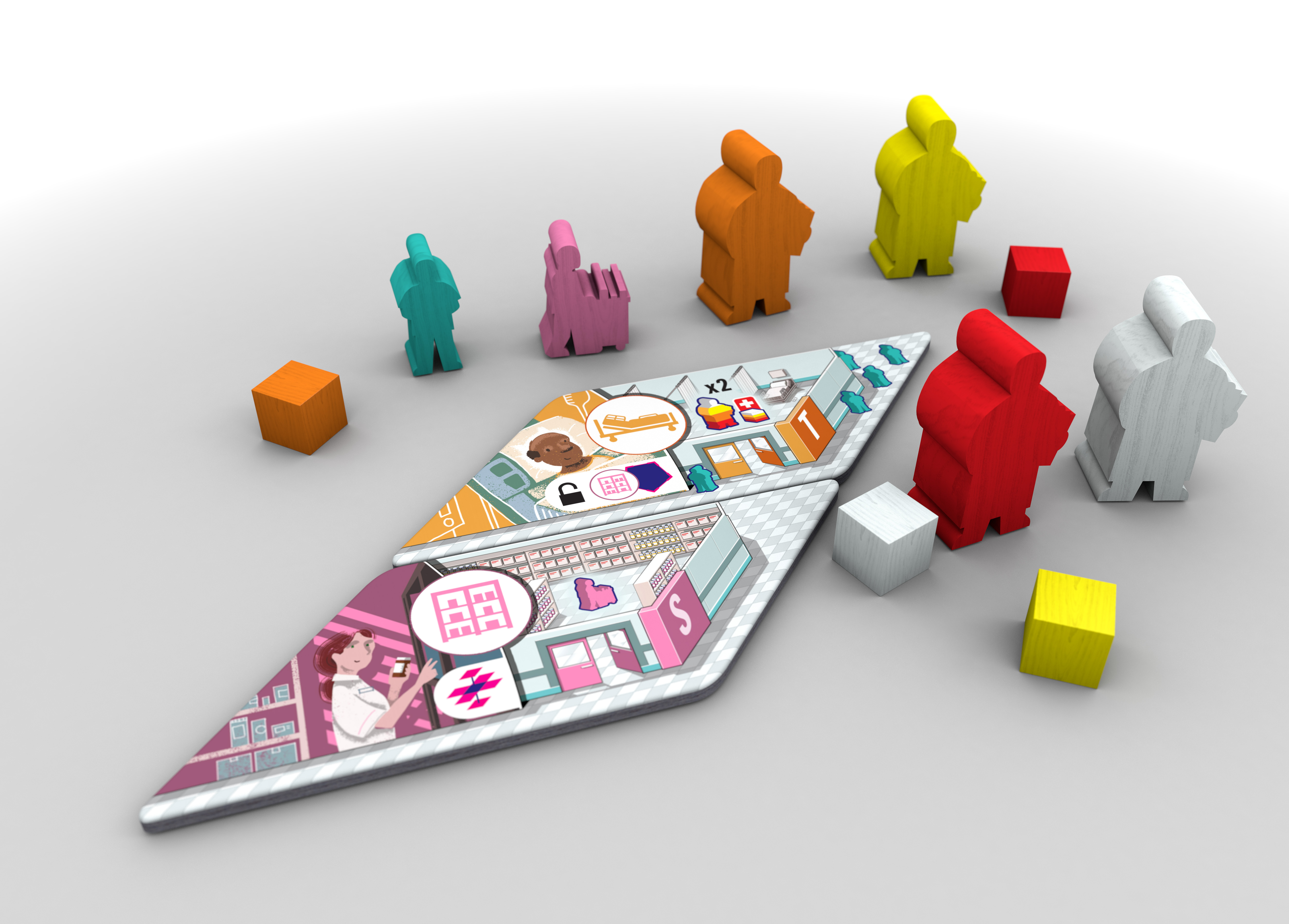 The KS campaign for Pulp Detective 2 will be launched February 5th 2019!

After its breakthrough success in 2018, Pulp Detective is back with a vengeance!

New cases to solve, new detectives, and new cards for even more variability! Click HERE  to back the project on Kickstarter.

And, as previously, we licensed 1920s-50s pulp artwork for this second expansion...

I am very happy to announce that we are working with Todd Sanders to release a second expansion for Pulp Detective! We want to add more control on the game, offer a solution for the wrong cubes color and add more content to the base game, more cases, more detectives/Inspectors! I plan to launch a campaign to fund this expansion on KS in February 5th 2019. It will contain 1 NEW Girl Friday die, 8 wooden cubes and 26 new cards (2 new cases, 2 new detectives/inspectors, 3 new criminal cards from the the society of corpses, 18 Henchmen, gun molls and trap cards, 1 new item card)

Brutus will be launched January 1st 2019 on Kickstarter. There will be two edition, the normal edition and a deluxe edition with 6 Minis Emperors and the 180 - pages book. This book has been written by Eric Mc Childe and this story is based on the Emperors of Brutus the board game, a hard boiled novel...

Card City XL Crime Expansion is now live on Kickstarter! This small expansion is a set of 12 cards and is playable with the already CCXL ways to play CCXL... 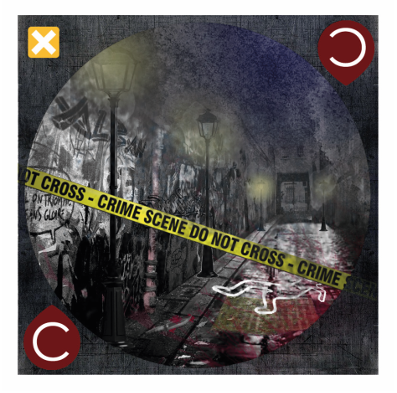 It is a new concept in the game market: designing a portable complexe game which has no setup and can be played everywhere in solo or duo. Minimalistic components (only a book and an erasable pen)... 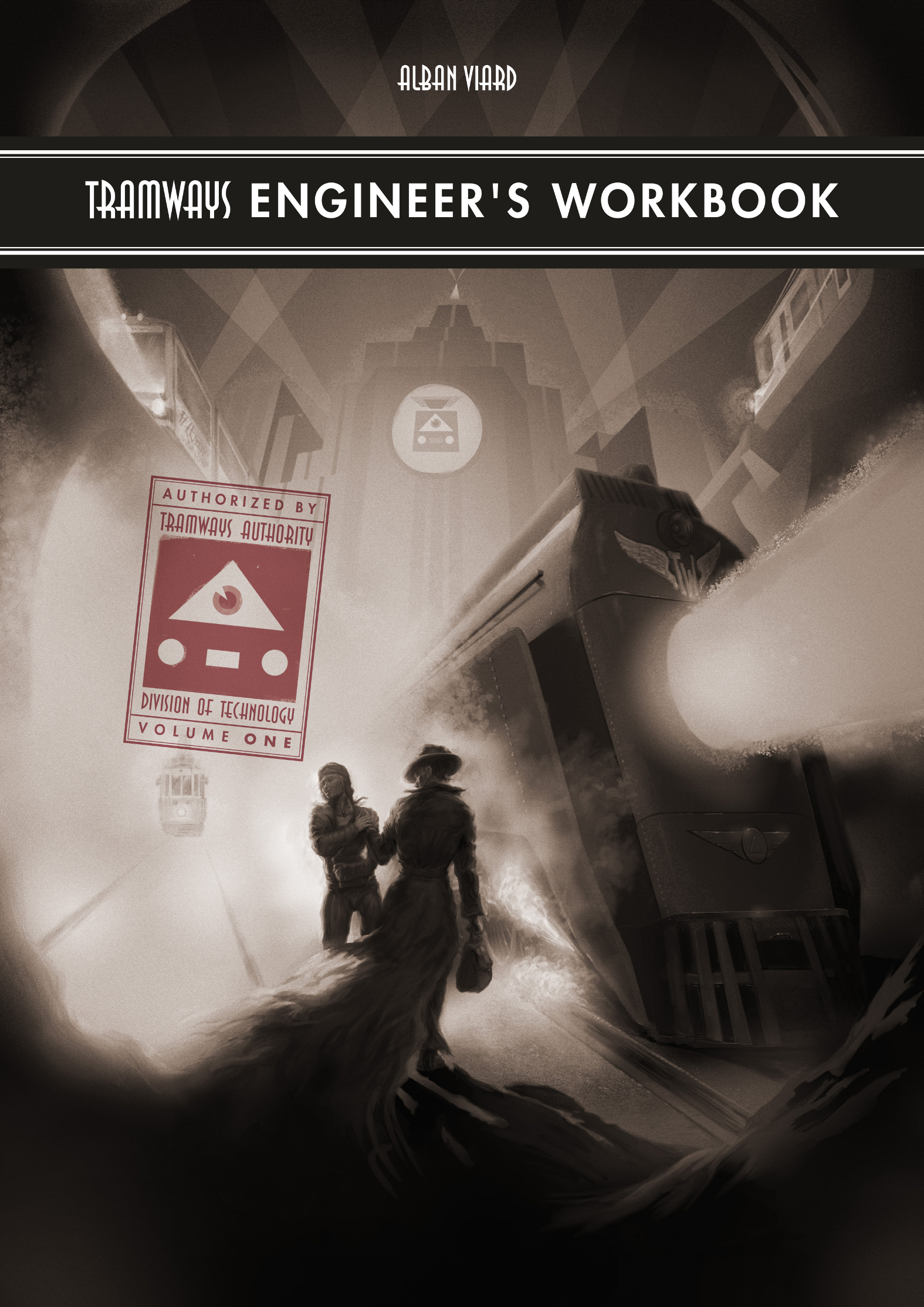 We are running the KS for the new game under the logo AVSGames PLUS.

The Campaign Mode has been unlocked. You can read the rules that link the 7 cases of the base game and expansion HERE.

The dice samples are ready and the embossed dice are very nice... Don't miss the campaign in February

- Here the first version of the 6 Emperors I will have in Brutus, my newest game: Brutus is a fast territory building game in the small city universe. KS campaign is planned in May 18

- 150 Age of Steam sets will be available December 1st. Last year, all the sets have been sold within 36 hours, so stay tuned and be reactive when the newsletter will be dispatched... 4 New maps and 1 Reprint of the very old map from 2006.... MARS... (with new stunning graphics...

- Here the cover of the new game from AVStudiogames PLUS: It is a narrative-detective-clue-dice-solo game designed by Todd SANDERS. The graphics are coming from real pulp magazines covers copyrights Steeger Properties. I will launch the KS February 1st 2018

AVStudiogames has now a second line of games: Games that I have not designed but I have personally developed for talented designers

Here the logo of AVStudiogames PLUS.

The first game under this line will be published in February 1st: Pulp Detective. It has been designed by Todd Sanders, more infos will come soon...

Just few words to let you know that:

1) we are handling the Tramways and Small City expansions, they should all be ready for shipping by the end of September (in one week)

2) I am very happy that Tramways is on the list for the JOGO DE ANO 17 in Portugal!

3) We have received the Card City XL boxes and we will also start the fulfillment for the European countries very soon. The backers of the KS campaign will be the first served. Again a big thank you for your support. We will be on time.

4) And finally, we will be at the fair in Essen booth 1D-129 on the Ludicreations booth.

What else ? Stay tuned for other great games next year !

Tramways has won the HeavyCard board People's choice 2016.

Please visit their web site to learn more about the heavy side of the board games... 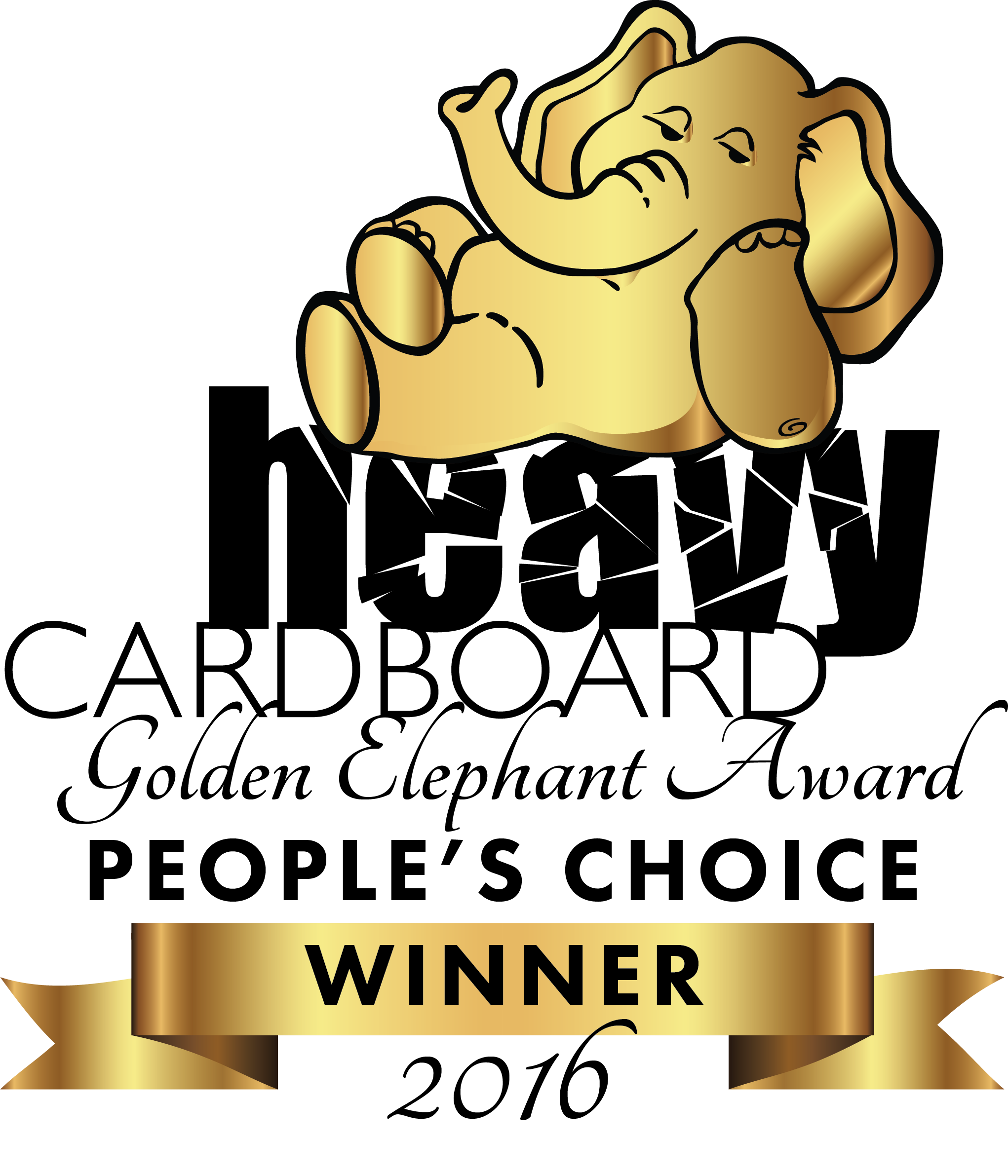 As promised, the campaign for Card City XL will be launched today on Kickstarter ! 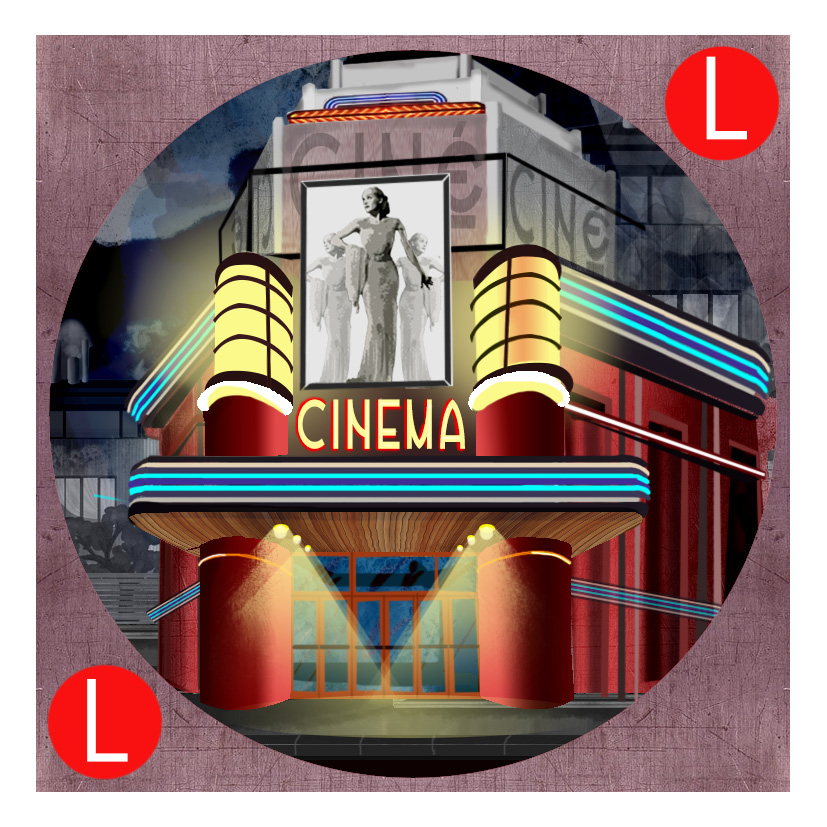 - I added few Tramways pack on the web site. It contains the base game and the 1st Tramways expansion

- I am very happy to share the cover of my next stand alone game called Card City XL who will be abbreviated CCXL for special reasons which I will explain later...More news soon... 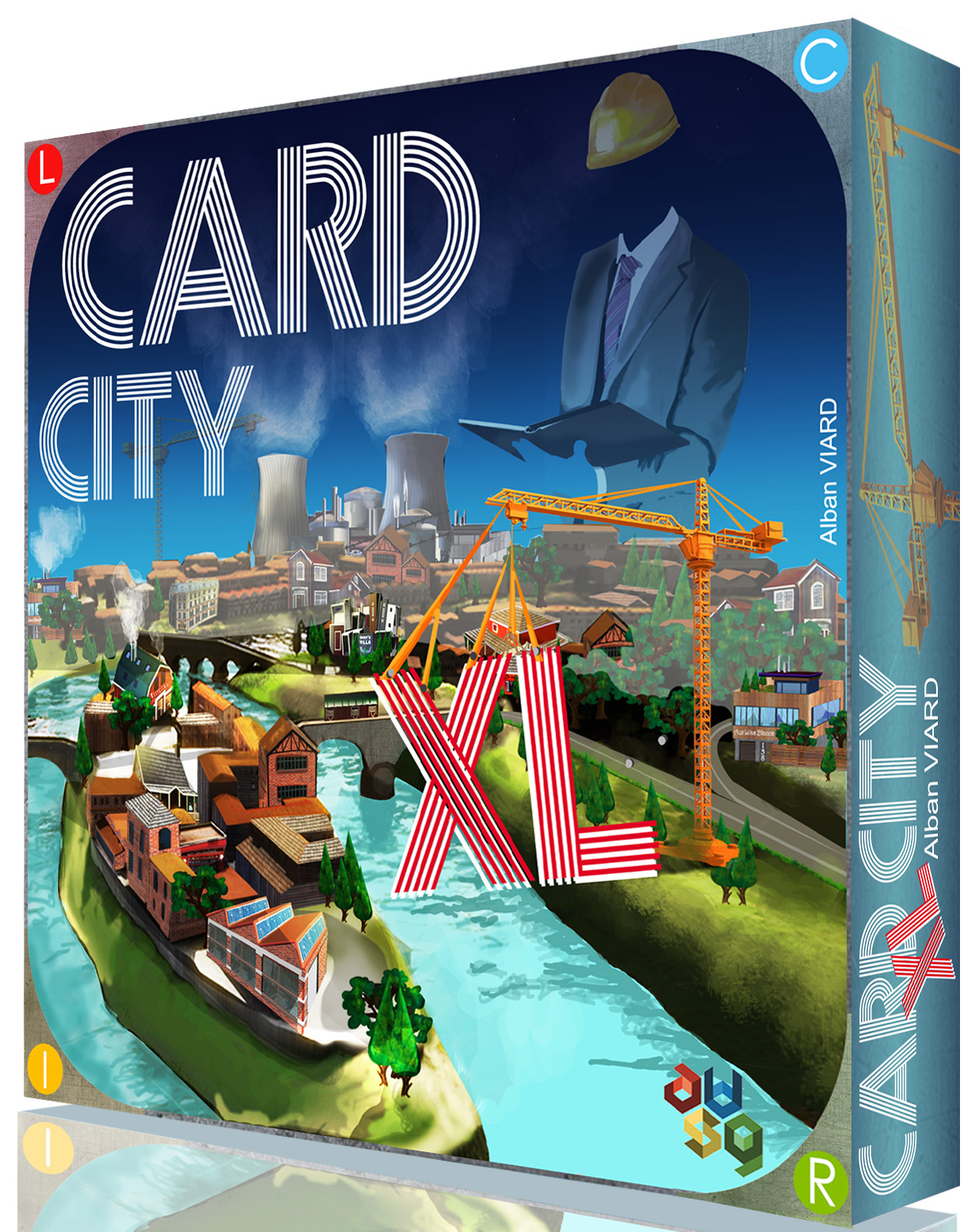 A great success for the 1st expansion of Tramways the base game. We will start the shipping in June, may be sooner...

I am running out Tramways the base game, so if you don't have it yet, I recommend to find a copy now.

The KS Campaign is live on KS TRAMWAYS EXPANSION We will build the trams in Paris and New York !

The campaign for TRAMWAYS : Paris / New-York expansion will be launched on Kickstarter February 1st 2017

50 new Age of Steam sets have been added on the web site, a second and last small printing.

100 Age of Steam sets are for sale on the web site ! Enjoy these new maps, graphic work by Todd Sanders !

Till 31th October , the shipping costs for Tramways are only 5€ where ever you live on the Earth ! After that, it will cost 12€.

We will be booth 1-D129 on the Essen fair with few Medical Dossiers for CliniC, and Small City expansion packs

IF YOU GO TO ESSEN, YOU CAN PREORDER TRAMWAYS BY JUST SENDING US AN EMAIL TO contact@avstudiogames.com

THE ESSEN PRICE WILL BE 45€ AND YOU AVOID THE SHIPPING COSTS IF YOU ARE THERE !

We are very happy to announce that TRAMWAYS boxes have been produced last week...

BIG CONSEQUENCE : The game will be ready for an Essen release !!!

We will send a newsletter this week which should give more informations for the Essen attendees.

For those who have backed the project on KS, an update will be sent very soon as well..

The KS campaign is over since  one week, but I am happy to announce that the files have been sent for approval to the manufacturer to produce Tramways week 32

The campaign for TRAMWAYS will be launched on Kickstarter May 16th 2016 : You takes the role of Investissor to build the network of Small City.

TRAMWAYS is a stand alone game. It will be produced by NSF games in the Netherlands.

Lauching of a new website specially dedicated to the Alban Viard's boardgames designs. AVstudiogames will present the latest News. It is possible to play some of the games in solo. A little shop is also integrated to purchase the stand alone games and expansions.

You can also subscribe to the website so you will be the first informed of his last creation.