21 new cards, a new campaign mode, a new nemesis die and a player mat with a slip case box to fit everything

Pulp Detective is a 30-minute game for 1-2 players.

Channel your inner detective, and solve the case within 24 hours! 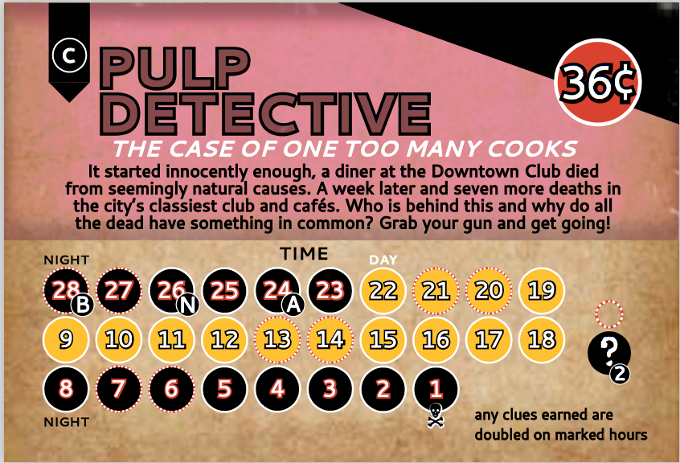 With ingenuity and flair you may just have a chance to find the 4 clues you need to confront the dastardly criminal behind this whole mess. Grab your gun and solve the case!

After its breakthrough success in 2018 and in 2019 with the 2nd expansion, Pulp Detective is back for the last time again with a vengeance!

During the two campaigns, we have heard from the backers and with suggestions to improve the game. It is now time to offer 3 great options that you have requested:

And, as previously, we have again licensed even more 1920's-50s pulp artwork for this third expansion...

If you want more items from us, just visit the web site HERE, this campaign is reserved for the funding of the third expansion and the bundle pack of expansions. You can add more items in your cart...

Even before last year's campaign ended, Todd had already come up with several new and fresh ideas for expanding the game. It is now time for some of those ideas to become a reality in this third expansion. More control over the game, more variety in detectives and criminals, more choices, more, more, more! 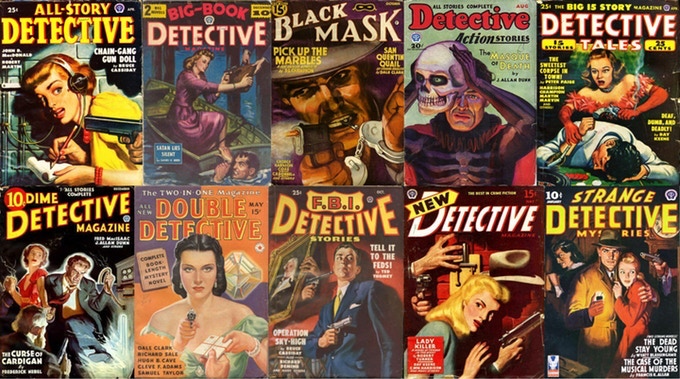 We wanted to offer a player mat during the last campaign in 2019 but we had not found a good solution for everyone.

With this new campaign, we are able to offer a puzzle of 15 pieces that fit in the expansion box#3 (but can be purchased separately).

Assemble the pieces and the player mat integrates all rules of the base game and expansions, with card placement areas for all 3 expansions!

This campaign is the last one we will run for Pulp Detective. There won't be anymore expansions in a the near future. So we wanted to offer case which could contain the base game, and all expansions.

The idea is also to display even more graphics and illustrations from the Pulp Universe... 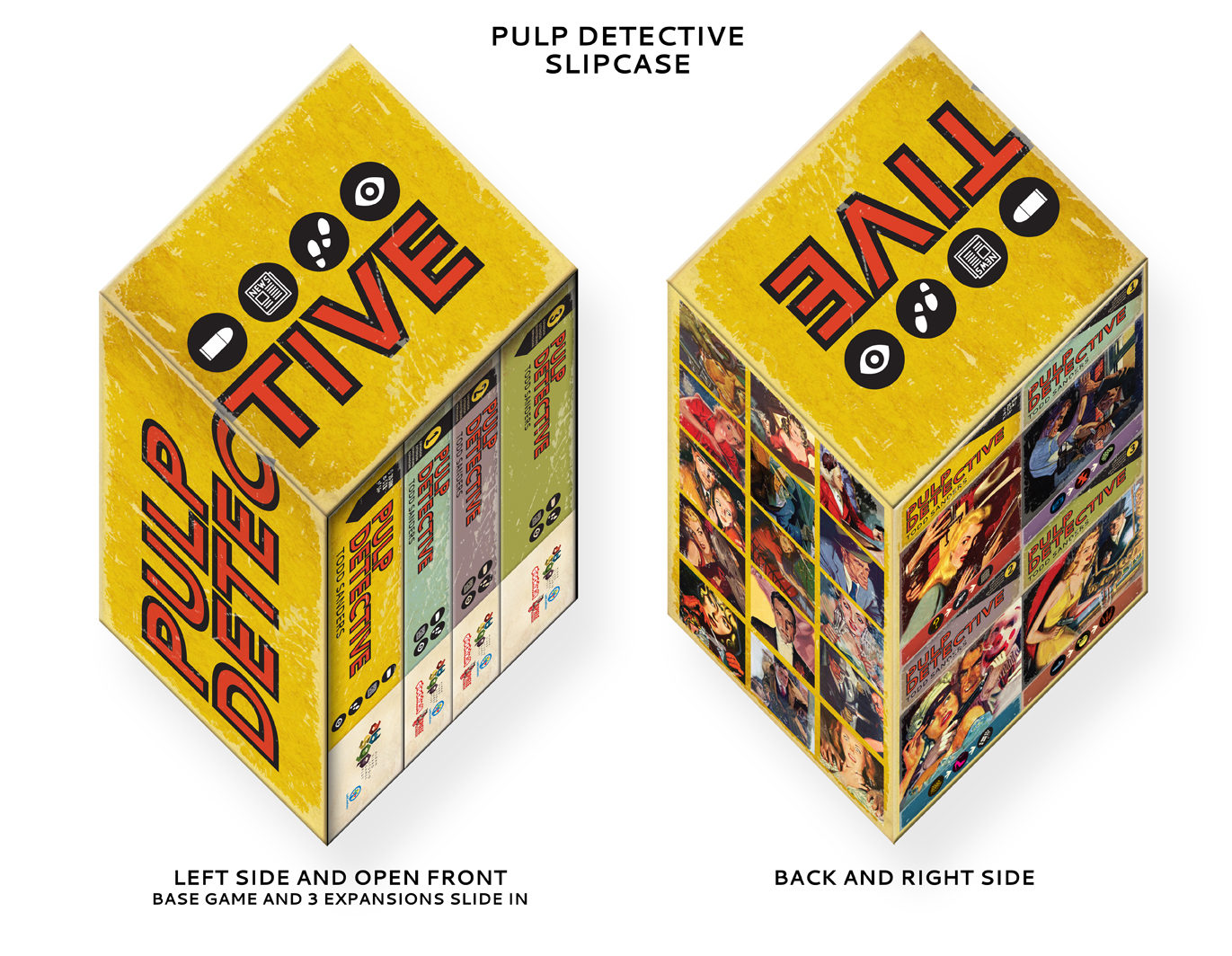 Todd Sanders the designer has managed to tell a big story with all 12 cases of the base game, expansion 1, expansion 2 and expansion 3 and you can experience a long and exciting story while working through the cases. Solving each case is not necessary to move through the campaign !

Four new adventures are joining the game, each functions as either a detective or a police inspector. 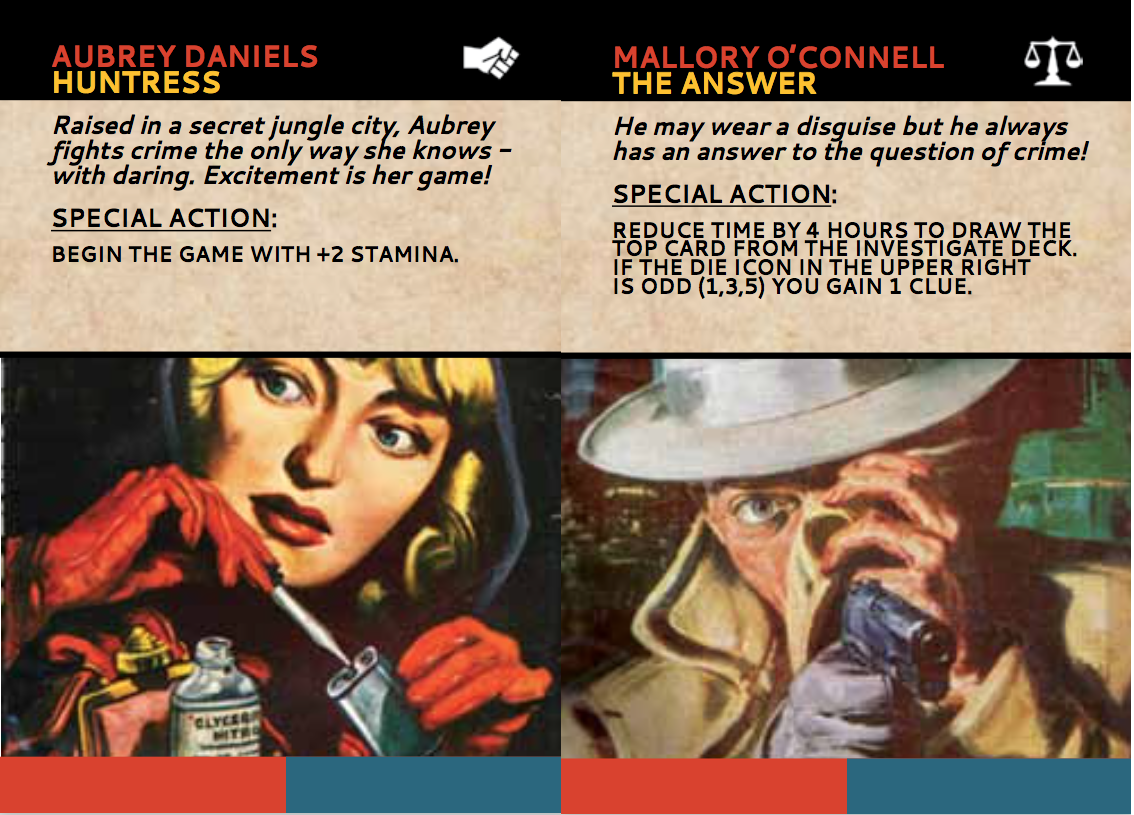 - Aubrey Daniels is the huntress of this new expansion! She starts the game with +2 Stamina

Roland Stark and Violette Markov round out the new choices for players.

The expansion comes with 3 new cases to solve each of which features nice twists and turns!

All cases can be played infinite times!

The six new Criminals are your Nemeses, recurring villains whom you encounter again and again while working the mean streets of the City.

The Nemesis is known at the start of the game rather than discovered during the Confront the Criminal Phase.

Publishing a new expansion means that we have a great excuse to produce a new die, and Todd has obliged us by designing the light blue Nemesis die! 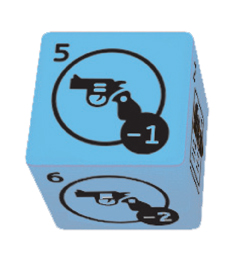 These new Investigate cards will always reward you with a Clue or cost you Time if your investigation is a failure. During the game if you fail an Investigation and the task row shows a die icon, rotate the Nemesis die to the face with next highest number. If the die is on 6, rotate back to 1.

During setup a player may use this new Items card (Gadgets) instead of those included in the base game or other expansions.

For more details on the components and rules of Pulp Detective click HERE .

We'd love for you to try Pulp Detective before you back the campaign! The game has been implemented on Tabletopia, and you can play for free HERE:

Todd Sanders lives in Pittsburgh, Pennsylvania, where he works as a graphic designer, publisher and furniture maker. He has great renown as a solo board game designer. 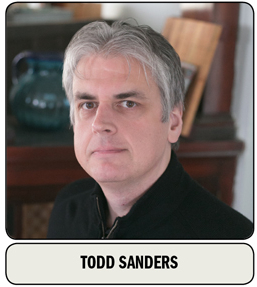 Many of this games have already been published and in the past three years Ludicreations funded KS campaigns for his card games IUNU, They Who Were 8, and Mr. Cabbagehead's Garden

Other games should come later this year: Pulp Invasion in April 2020 on Kickstarter, a second stand-alone game in the Pulp Universe with a sci-fi theme...

Like our past campaigns for games such as Pulp Detective, Pulp Detective expansion #2 and the Tramways Engineer's Workbook, we have respected the delivery time, and in some cases, boxes were even delivered earlier than expected (depending on how complex production of the game had been).

For the Pulp Detective campaigns, thanks to very rigorous management of the files, and great contacts at the manufacturers, we managed to deliver the game 2 months early!

We expect the expansion to be ready in October, the embossed die is the most complex part of the components to produce, and samples of them are nearly finished.

Because you are helping me finance my project, I will help you finance your shipping: I will pay part of the cost, so you only have to pay 3€ in shipping for the expansion and 10€ for the complete story so far reward. It is the least I can do.

First attempt on the web site to fund a game, and first success thanks to your crazy support!

I am now trying to improve the speed on the web site to have a better experience for the fans.

If you want a German version or an English version, during the payment process, there is small room for comments that you can use. If you can not see it, never mind, I will get in touch with you to confirm or you can email me directly

I am very happy to announce the launching of the last expansion for Pulp Detective called: Adventurers, Gadgets and Nemeses. With this new expansion, we can purchase: 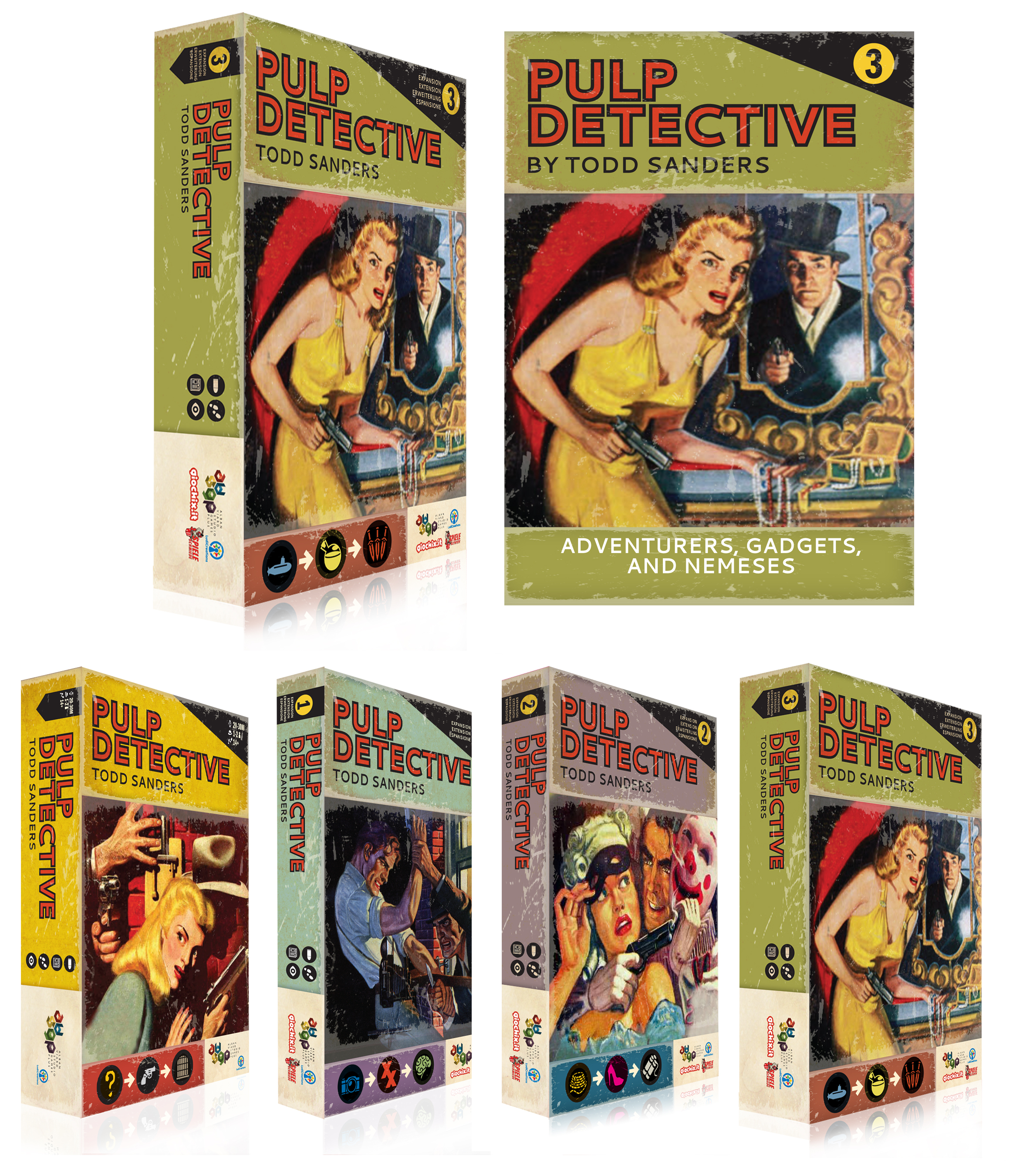 This third box is as thick as the base game box to fit the pieces of the puzzle...

The player mat has been divided into 15 pieces and it is a puzzle of 15 pieces that you need to assemble before your game.

The slip case box can contain the base game box and all 3 expansions with stunning illustrations.